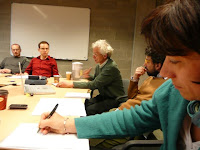 Brian Coates has given a talk within the IDC workshop series on the notion of Deconstruction on the 5th of May. Brian has offered a wide overview of the notion by largely drawing on the work by Derrida, Lacan, Foucault and Kristeva and some of their followers. According to Derrida, Deconstruction is ‘…is neither a philosophy, nor a doctrine, nor a knowledge, nor a method, nor a discipline, not even a determinate concept, only what happens if it happens –’. A quotation by Barbara Johnson has further framed the notion of deconstruction within the practice of ‘teasing out of warring forces of signification within (any given) the text itself’.
“The de-construction of a text does not proceed by random doubt or arbitrary subversion, but by the careful teasing out of warring forces of signification within the text itself. If anything is destroyed in a deconstructive reading, it is not the text, but the claim to unequivocal domination of one mode of signifying over another”.

Instances of decostruction and of warring forces have been provided through very interesting text analysis of Derrida’s dialogues with Plato, Rousseau, Husserl and Levi-Strauss; an analysis of the binary systems in Western culture and the need to deconstruct it was also presented; poems by Yeats, Eliot and Pound evidenced the crisis of modernity; Nietszche and Barthes were quoted to point up the way in which deconstruction works. Lacan’s concept of the mirror stage, Kristeva’s chora and Foucault’s panopticon provided examples of deconstruction at work. The group worked together on a practical exercise – to deconstruct a passage from J.M. Synge’s Journey to the Western Isles and a poem by Tom Leonard, ‘Yon Night’.

A debate has followed where IDCers has tried to make connection with their experiences and interests. Mikael Fernstrom showed how the very principles of deconstruction often guide his artistic practice especially when this is driven by hijacking intended design and tinkering with possibilities (he provided the link www.softday.ie). Cristiano Storni has tried to show the warring forces related with his actual domain of investigation (Health Care) by discussing (and possibly deconstructing) the notion of Compliance. Compliance is in fact a concept developed from the point of view of the doctor and of biomedicine and it has the specific function of showing what people should do and of rendering non-compliant behavior as a form of deviation in need of an explanation and of control. His point was to show that – for instance – when designing for patient empowerment certain notion can be misleading and bring not so much to an emancipation of patient but rather to further and even more subtle forms of dependencies.
Luigina Ciolfi has found interesting connections with Philosophy of science and asked about the relationship between the work of Derrida and the critical studies of science and scientific knowledge (e.g. as in Feyerabend). Further connection where found in the work of semioticians Kristeva. 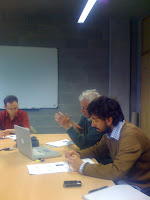